A True Story of Achievement by a College Student with Autism 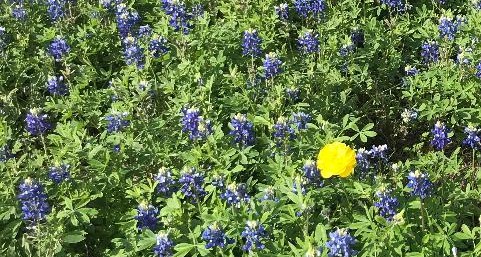 Why this image? Because when you have a child with autism or any special needs, it is like looking upon a field of bluebonnets and seeing one bright, waving, yellow rose standing within and apart from the sea of blue at the same time.

Today's story is about one such yellow rose, Sean Cunningham, shared here from a newspaper article written at the time of Sean's graduation from college. I, the managing editor of MSI Press, know this story to be true because as a child, Sean attended school with my son, came to our house for play dates, and stayed in touch over the years. His achievement may be considered remarkable, but it does point to possibilities by other young adults with autism.

And here is the story:

An Autistic Student Makes History
http://www.wusa9news.com/news/news_article.aspx?storyid=39706
Sean Sokler has full spectrum autism.
He uses a machine to communicate, twists his shirt incessantly, and often stares off into space.
But inside the nervous exterior is a thirsty mind- eager to grasp a formula scrawled on the blackboard.
It has to do with quantum mechanics and mathmatics.
“ Sean is a true inspiration. He's one of the best students I have in my class”, says teacher Rita Sambruna.
“I think he's the teacher here. He's been my teacher”, says Sean’s mother Barbara Cunningham.
In 4th Grade, the experts concluded Sean had an IQ of 18.
But he's blown through everyone's expectations.
“They told us he was going to die, of a chromosome problem”, says Cunningham.
For six years, Sean has studied psychology at George Mason University.
And this week, he joins an elite cadre.
Only three people with full spectrum autism have ever graduated from an American University.
Sean uses something called facilitated communication. Every term paper, every question in class, has to be typed out one letter at a time on something called a light writer.
Critics have suggested it's just hype.
But Sean's assistant knows it's not.
“ I don't go around telling girls they're attractive. And when Sean types that, I'm not the one saying it”, says Angie Natale.
And Sean communicates in more than just English.
He's fluent in four other languages.
Deborah Wyne runs George Mason's Disability Resource Center.
“ I feel great about it, because when he first came in, I didn't know. I though will he be one of those who will graduate. I feel great, he's a success story” says Wyne.
Sean hopes to be an example for others.
He believes everyone with disabilities should know they have choices.

For comments on this story, see Greek Chat.

See our blog posts on autism.