In Honor of Caturday, Presenting Sula, Parish Cat at Old Mission (via an Excerpt from her Easter Book) 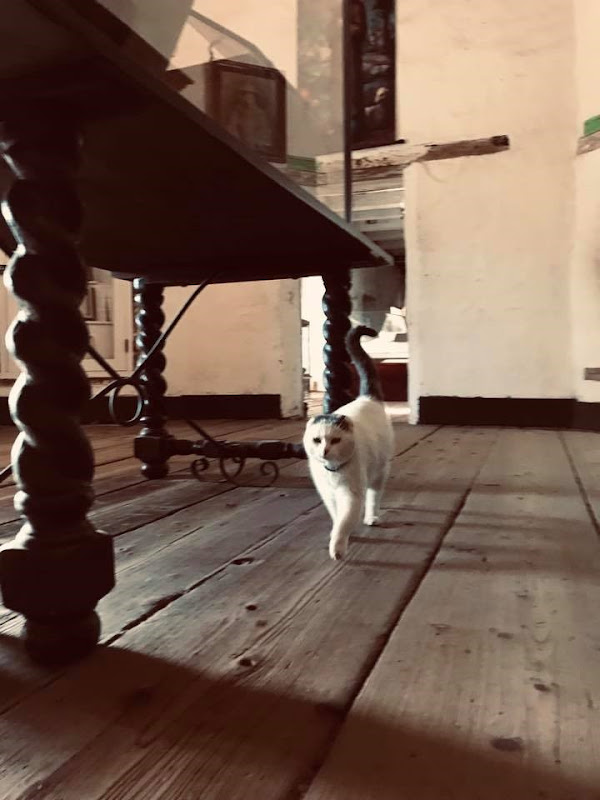 And now, about me—

Every morning, I make the rounds of the museum, grounds, and church, after starting my day at Mass in the Chapel with the priest and parishioners I love—and, appropriately, on a bit of an empty stomach though I do not take communion (being a cat, you know). After Mass, I go to the Mission Gift Shop for breakfast and, depending upon the day, I begin my rounds somewhat later.

Actually, if you have read my other books, you know as much about me as it is possible to know. For those who have not read them yet, I can tell you my tale in a nutshell. It is pretty simple because the beginning is rather cloudy. I only know what the people at the Mission Gift Shop remember about me some 12 years ago. Yes, I am quite a big girl now with my own set of life experiences.

It seems that I was always in San Juan Bautista, a beautiful Mission town in the Mexican tradition. Lots of Spanish spoken here, so I have had to learn to meow in and respond to two languages.

People say that they first saw me at the cemetery. Well, there is not much action there, so I came down the little hill into town and began to hang out at City Hall. There was a little more action there, but it was still rather boring and not appealing to me. Somehow, I did not think that was my calling, just like many people of my acquaintance, especially young ones, say that their first jobs are not their calling but only work to put food on the table while they are trying to figure out their calling. I get that. I did not know my calling, either, until I heard the bells pealing at the Mission across from City Hall. I trotted over to see what was going on. Though still a kitten, I knew I had found my mission in life: to minister to those at the Mission with the help of God, (my Boss) and St. Francis. I became a “Catolic” immediately. I understand that this is what often happens with people, too. They “search” for their mission in life, but more often than not, their calling finds them while they are busy working.

The rest of the story—how I minister, how I survived two bouts of cancer, how I lost my ears, and how I made so many lifelong friends at the Mission—is told in my first four (wow, four already!) books, Surviving Cancer, Healing People: One Cat’s Story, Tale of a Mission Cat, Saints I Know, and Christmas at the Mission: A Cat’s View of Catholic Customs and Beliefs. They have some great pictures, too—of me, the people I minister to, and the people who minister to me.

To read more posts from and about Sula's Easter book, click HERE.

To see excerpts from Sula's other books, click HERE.