Book Excerpt: How My Cat Made Me a Better Man - Overcoming Roadblocks (Feig) 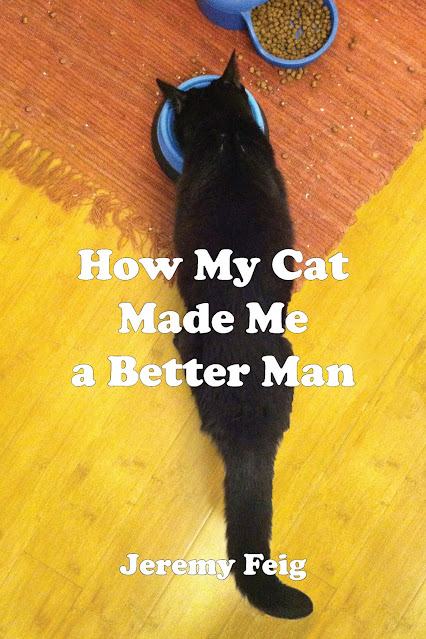 In honor of Caturday, here is an excerpt for the award-winning book, How My Cat Made Me a Better Man by Jeremy Feig.

I’d grown tired of the hard laminate floor in my living room. So, I bought a thick shag rug and laid it in front of the couch. While my feet loved the cushy, retro carpeting, Shelly did not. In fact, she was intimidated by it. She would cautiously walk around it, fearful it might come alive and devour her. She even stayed off the couch to avoid getting too close.

This went on for a few days until Shelly’s desire to lay on the couch overcame her hatred of the rug. I watched as she put a tentative paw on the carpeted edge. Noticing that it didn’t try to swallow her, she put another paw on it. Pretty soon, all four paws were on the rug, and Shelly was still in one piece. Success!

After that, Shelly and the shag rug became pals. She’d scamper across it with ease and slumber in its soft tendrils. While she was nervous during her early encounters, she managed to face her fear and conquer it. The rug wasn’t the enemy she thought it was. It was an obstacle, a roadblock. Like most roadblocks, it could be overcome.

Let’s say you want to see a band but forgot to buy tickets to their show. Your choices are either to accept missing the show or figure out a way in. You could try going to the venue and looking for scalpers or put on a feather boa and walk through the artist’s entrance, saying you’re with the band. Sure, you run the risk of getting tossed out by security, but if it’s a show you really want to see, why not give it a shot?

Maybe you’re stuck in slow freeway traffic (yes, your roadblock is literally a roadblock) and you feel like you’ll never get home. One option is to stay put and hope things miraculously clear up. Another is to get off the freeway and try a new route, which has the potential of being faster. Of to get home, or you could get lost and end up in a rough neighborhood, where teens in gang colors eye your orange shirt suspiciously.

That’s the thing. Whatever your plan is, it won’t always work. That’s okay. On the other hand, if you don’t even try to get past the roadblock, it’s already beaten you. It already held you back.

Imagine you’re trying to write a screenplay, and every time you sit down to write, you lose focus, so you turn on ESPN instead. There’s no shame in not writing a screenplay, but if it’s something you really want to do, you have to improve your chances for success. If that means cutting the cable or locking yourself in a closet with no distractions, so be it.

You’re not powerless to overcome the obstacles in your life. You just have to be proactive, creative, and formulate a plan. If you’re not sure where to start, look to the lessons of the cat.

See pictures of Shelly, the cat who inspired the book HERE.

Jeremy Feig is originally from a small town in slightly upstate New York. After graduating from New Paltz College, he moved to Los Angeles for TV and film production work before stumbling into a career in digital marketing. Jeremy spends much of his time working on creative projects, usually involving comedy. He’s written numerous screenplays and TV scripts, created original cartoons, and directed quirky short films. Jeremy lives in Santa Monica with his wife, young daughter, and large cat.