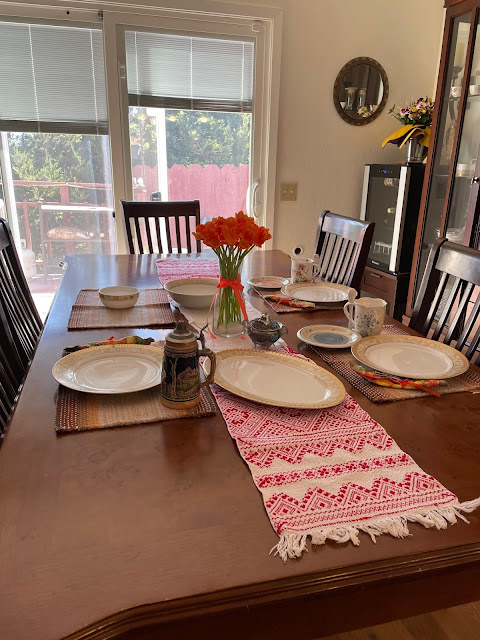 I make this post here and not Cancer Diary, although Carl died from Cancer, because Carl was an important member of the MSI Press staff from its inception in 2003 until the month before he died. He was still working on typesetting tasks on July 23, 2021 when he fell and was admitted to Stanford, then sent home on a very short 10-day hospice. 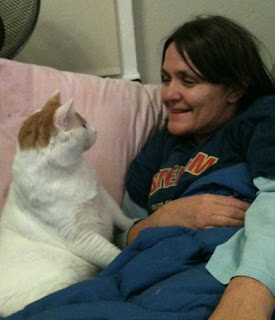 I am also including it here, on Caturday, because our cats were a very important part of Carl's life. Particularly Intrepid, who lived up to his name yet snuggled with Carl every night and, like Carl, died of cancer three years ago, resulting in a book named after him, and Murjan, shown here, who never know whether he was dog or human but certainly did not consider himself a cat, could be found at Carl's elbow every day, especially at mealtimes. He was a very polite cat and would wait his turn for food, and one could have a fairly long (5-10 minute) conversation with him while he would react by licking a hand, looking in the eyes, rubbing his head against a face. It seemed like he just may have understood the conversation.

Murjan died one month to the day after Carl died. Also from cancer. 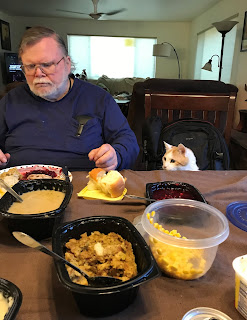 So, the anniversary table was set with the usual cultural mishmash but festive pieces that best represent the nature of our lives, spent on unrelated-to-each-other continents and in countries that have been from time to time unreachable: runner from Belarus, poppies from California, dinner plates from Jordan, dessert plates from Bahrain, beer stein from Germany, cups from China (given to me when I was working in Korea), sugar bowl from Iran, and, quite appropriately, silverware and napkins leftover from Carl's memorial in San Juan Bautista. Of course, Murjan was honored with an empty bowl at the place he usually occupied.

That table was so in need of its two missing anniversary participants: One could only enjoy the meal that came in honor of those who had left, leaving in their places the near-embodiment of grief that even a half-year later steals into the heart and into life and maybe always will, especially at such poignantly remembered moments as a "family" around a celebratory table.

RIP Carl. RIP Murjan.
Both of you are missed by more people than one can easily count.
The hole you have left in lives cannot be filled.