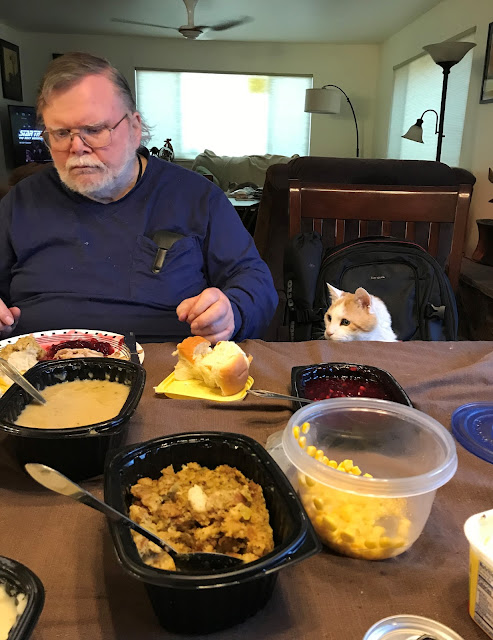 Gaudete Sunday is coming up--an oasis in Lent, and, like other Sundays, a time we can eat a full meal! If our beloved Murjan were still with us, he would be perching on his chair next to Carl (wish he, too, were still with us, 2021 stole two beloved members of our family), savoring the smells of the fat of the land (well, maybe, of pancakes -- he at those, too), and patiently (yes, he was a patient cat, almost humanly patient) for his share of the feast to be chopped up and presented for his enjoyment.

Each of our cats had quite different personalities, but the two that stand in stark contrast to each other are Murjan and Intrepid. They were both born in Jordan, lived with us there, and came to California with us 15 years ago. Both are now on the other side of the rainbow bridge, ravaged by the same kind of cancer, feline lymphoma. Intrepid is interred with his devoted human to whom he was equally devoted, Carl, and Murjan's ashes are with me, along with his pictures and priceless memories.

Murjan was a Turkish van cat. This breed is perhaps the most social of all cat breeds, and Murjan proved the reputation to be solid. When I would return from work, he would stand beside me on the couch and talk about his day. I would talk; he would talk. I would pet him a bit; he would lick me a bit. The conversation would continue 5-10 minutes, then he would lie down and rest beside me. As I went about house chores, he would follow me. He loved walking on a leash and would go to the drawer that held his leash and meow, "mwout, mwout," making it quite clear what he wanted. And, of course, when it came to meals, he was always there.

Intrepid was a tabby-Egyptian mau mix. The mau was quite evident when he sat -- he looked like a small version of what seem to be stylized Egyptian cat drawings -- but when you know the mau breed, they don't look that stylized. Intrepid earned his name early on from his kamikaze attacks on our indoor plants -- he would run rabidly across the floor stop dead-center, and fling himself, sailing, into one of the plants, which would always tip over and break. We soon gave up on plants, but Intrepid did not give up his derring-do ways, following me up ladders, jumping from floor to small spaces on top of high cupboards in one leap, and always reigning on the top level of the cat trees.

Some people have tried to type their cats' personalities in accordance with Jungian types (MBTI or socionics). In that case, Murjan would be an ENFJ and Intrepid an ISTP. Polar opposites, but they were best buddies. Murjan protected his little brother Intrepid, and Intrepid would follow his big brother Murjan, who was quite an escape artist, always intrigued by the outdoors, even if it meant finding his way down a 30-foot wall. If cats of opposite temperaments can be best friends, perhaps they have something to teach humans!

(Your turn: type your own pet. If you do not have access to the MBTI test, use the socionics test in Filatova's book or this free online MBTI test. You will, of course, have to adjust for cats since the tests are about people. And, caveat emptor re the free MBTI test, you get what you pay for. The official test costs a pretty penny, but is much more accurate. On the other hand, you are only typing your cats!)