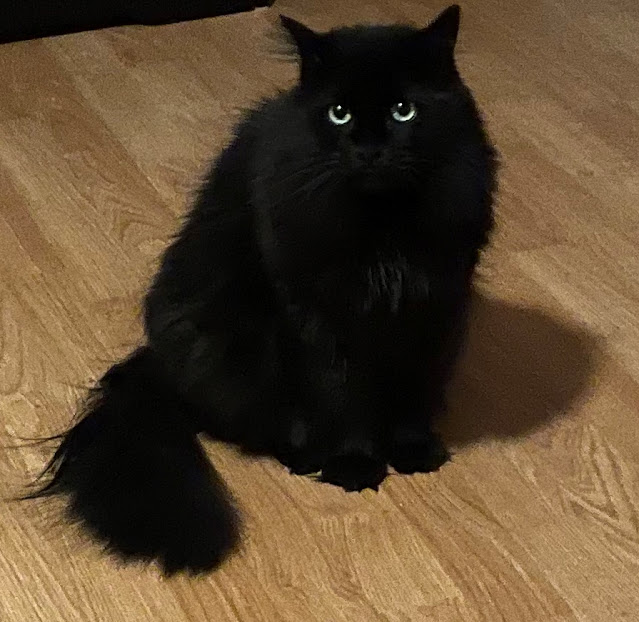 his is a series of Caturday posts on the topic of taking in feral cats.

For a few decades, we have rescued feral cats. In fact, with only one exception, our "domestic" cats have been ferals that we brought inside to join other ferals, already domesticated, as part of a bonded cat family. Right now, we have five cats (alas, Murjan, the single non-feral cat we had, died from cancer last fall, and Intrepid, closely bonded to Murjan, died three years ago from the same kind of cancer), all of whom get along pretty fabulously.

Of course, all of that is easier said than done, and the bonding took time -- lots of it. Here are some of the things we did to create our cat family, some of which is not at all typical of what others have done, but it has worked for us.

In this post, I introduce another feral cat rescue: Bobolink.

Actually, unlike our other cats, Bobolink was trapped. We learned about his situation from the trapper, a lady in our community who spends a lot of time, effort, and money with TNR activities. There were serious concerns about what to do with Bobolink, who was named at the time Boulder because ne never moved from one place. In fact, he would not even move off the bed pad he was on to use the litter box. He would just go on the pad. He allowed himself to be picked up when there was no choice, but he trembled uncontrollably. Whether he could continue to survive on the street was not clear, and he was considered not adoptable because of his fears and behaviors.

We took him. He had long silky black hair, brilliant and expressive green eyes, and a gorgeous plume of a tail that none of us had seen the likes of before. He did not hold it up much (he does now); mostly he wrapped it around himself protectively.

We put Boulder/Bobolink by himself in the cat room where he had his choice of cat trees and tree levels. He always wanted to be in the little house half-way up the tree. I would take him out for feeding times, and he would make a beeline back there. In a few weeks he got brave enough to hiss at being moved. I spent a lot of time just being in the room with him, talking to him, occasionally petting him when he allowed me to be close enough. He did start using the litter robot; he did not have to contend with the output of the other cats since the robot automatically cleans after seven minutes.

One day I had to be away all day. I did not want to leave Boulder/Bobolink alone all day, so I put Happy Cat, the nurturer, in with him. When I got back, I found the two of them playing. Boulder/Bobolink was out of the little house and wresting on the floor with Happy Cat. I pulled out a string toy, and they took turns batting the fish. When I opened the door, the chased each other down the hallway. That is when Boulder became Bobolink. I sent some videos to the person who trapped and named him. Her comment: "He's not a Boulder anymore."

Still, he did not want to interact with humans. We figure that humans hurt him on the streets. It took nearly a year before he would let me pick him up, comb his hair, and otherwise interact with him. That second hurdle past, he took to sleeping on the various cat trees on the catio and not worrying about who might suddenly appear near him or pick him up. We have learned over time that domesticating feral cats, especially abused ones, takes a lot of time and patience -- but is worth it. These cats often become quite affectionate after many months or a few years. 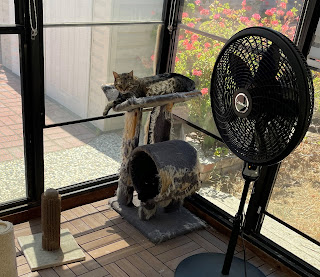 If you look really carefully, you can see Bobolink's green eyes peering out of the darkness of the round tunnel underneath Wooper on the upper berth, and his big fluffy tail curled underneath. You do have to look carefully. Except for his shining green eyes (which do not show up as well as yellow eyes), he blends into the shadows. More than once we have closed up the catio and missed the fact that he was still out there. In the morning, we would find him patiently sitting at the sliding glass doors leading into the house, waiting patiently for someone to get up and discover him. Having been born on the street and living there his first half-year, he loves the smells of the outdoors, and being locked out overnight does not seem to phase him. 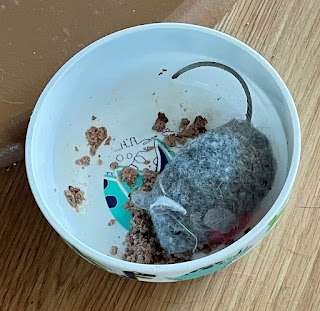 However, he does have some preferences about food. He takes toy mice out of the cat toy box regularly and plays with them. Of all the cats, he is the most active when it comes to mouse play. Given that we seem to not understand his preferences for food -- he is on DM because we have two cats with special needs who have been put on a DM diet by their vets. To make it easier, all the cats are fed DM. That way, we do not have to remember who gets what. Bobolink clearly knows how to forage for food from this street days. Given a choice, he would rather have a mouse than DM. That was very clear one morning when we got up and found he had put a toy mouse in his dish to let the dumb humans know what they should be feeding him: "A different kind of food, please!"

Available retail, online stores, and, at 25% discount with code FF25 from msipress.com/shop.

Co-authored with Laura Dabbs, University of Alabama at Birmingham. Available retail, online stores, and, at 25% discount with code FF25 from msipress.com/shop.