Excerpt from How to Get Happy and Stay That Way: Practical Techniques for Putting Joy into Your Life (Joanna Romer): Expressing Gratitude 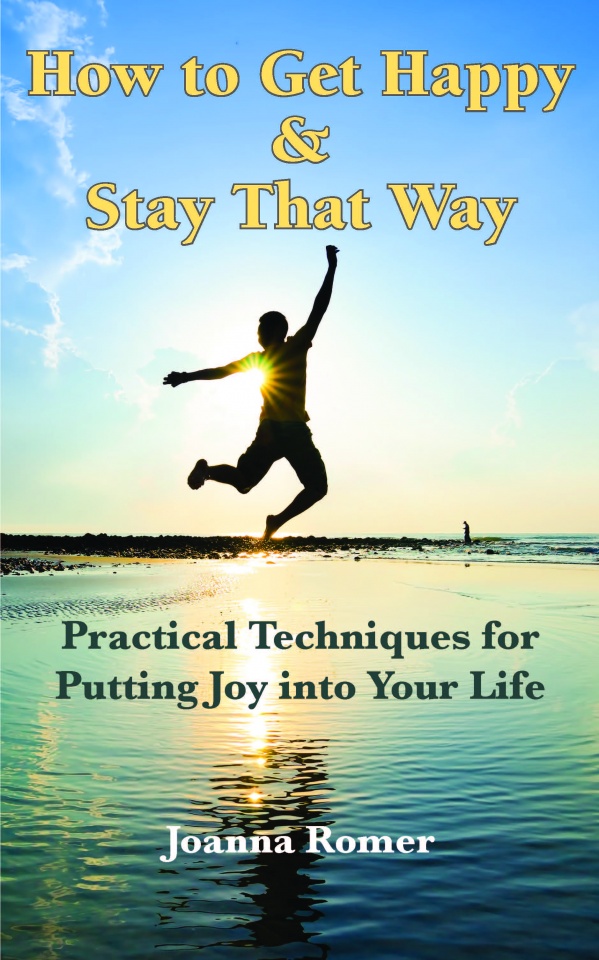 After we have identified our passionate pursuit or mission, and have begun engaging in it—hopefully every day—the next step in the happiness package is to express gratitude. By that I don’t mean just saying, “I am grateful,” once, and letting it go at that. No, for true happiness we must learn to express gratitude every single day, as often as possible. I would suggest gratitude employment every time we engage in our passionate pursuit. Let it become second nature.

How do we do it? Simply say aloud, or to yourself, “I am so grateful to be enjoying this wonderful activity,” or, “Thank you God, for allowing me to enjoy (skiing, or planting fruit trees, or playing the piano, or ballroom dancing, or racing automobiles, or designing software programs).” If you choose, of course, you may leave off the word “God” and give thanks to serendipity, or good fortune, or luck. The point is that you are acknowledging your happiness.

Allowing yourself to feel grateful cements into your consciousness that you are doing something you enjoy very much. We can also make lists of things we are grateful for, and put our passionate pursuit at the top of these lists. Once we get into the habit of expressing gratitude, we’ll start to notice little buds of joy lurking around our declaration, whether it’s oral or written. It is hard not to feel good when we are thanking the “powers that be” for the wonderful activity that is currently bringing us pleasure.

Finding the mission that brings a smile to your face and a lightness to your step—then expressing deep-found gratitude that this “miracle” has happened—these are the two first and most important steps in your pursuit of happiness. What are you waiting for? Be grateful!

“Look at the blessings that you do have—think about them and count them.”

Ellen Young, an elegant widow of 70, says she has a good reason to be happy: she’s found a new love. Her husband died of a heart attack while on a camping trip in Colorado three years ago, and for a while Ellen was devastated.

“I’d had a sort of premonition,” she told me, regarding her feelings about her husband Jeff’s death. “I was in a log home seven miles up a mountain road—what would I do?”

She said she and her husband had spent 10 years building their log home in New Mexico, and lived in it 20 years. “I think about that house,” she said. “It was Jeff’s dream. When he died, it became my nightmare.”

What Ellen did, after her husband passed away, was to start making notes about everything she needed to take care of. First on the list: putting the log home up for sale and moving in with her married sister Cynthia, temporarily.

One day she accompanied her sister to the flea market, where Cynthia had a booth.

“This guy was walking by with a yellow lab,” Ellen said, explaining that her sister started a conversation with the man and told him about Ellen’s log home. The house was an off-the-grid solar home, and it just so happened that the man, Ryan, had a degree in environmental technology.

The two walked out to the parking lot together, and the first thing she asked him was, “How old are you?”

“I’m 68,” she told him and waited for his response, which turned out to be “pretty cool,” she thought.

Ellen said he texted her and asked if she texted. She called him and said no, she didn’t text, but they began to have phone conversations. And pretty soon they got together.

Later she began to feel guilty. “I thought, ‘I shouldn’t be feeling happy! My husband has only been gone a few months.’ But then I thought, ‘Wait a minute. If I’d died, I’d want Jeff to be happy.’”

She said she knew she was already interested in Ryan from their first conversation. He’d been recently divorced; Ellen felt the two of them healed each other.

Ellen and Ryan dated for two years, and in 2015 they bought a house together.

Ellen said she thinks it is important, when faced with a challenge such as she was with the sudden death of her husband, to keep busy. “Don’t just sit down and feel sad,” she said. “Find something to do.”

She volunteers at the Y, and recently lent her services at an historic lighthouse, where she walks up 203 steps to show visitors the view from the tower.

“I thought something horrible happened to me,” she said. “But I had family. I had security. I had my writing. There are women in a lot worse situations.” She said she thought about 9-11, and the woman with three little children whose husband died fighting forest fires.

She saw an ad in the Hometown News, a community newspaper in her area, looking for writers. “I’ve been a journalist since high school,” she said. “I called the editor with a story idea about a female boat captain.”

Ellen said the editor wasn’t terribly enthusiastic at first, but told her to send in the story. Then he called back and said he liked it. The part-time position doesn’t pay much, but just doing something she likes makes Ellen happy.

“Whatever a person loves to do, do it,” she said. “If you play an instrument—play it. If you love to cook—cook. Do not sit there and mope.”

She added that she has “her moments”…but when she feels down, she’ll take the dog and go for a walk, or talk to the neighbors.

“If you’ve got to re-invent your life, do so. Jeff’s death was so sudden. After everything that’s happened in the last three years, I just go with the flow and try to be happy and enjoy life,” she said. “You never know how much ‘life’ you have left.”