Excerpt from Easter at the Mission (Sula): Palm Sunday 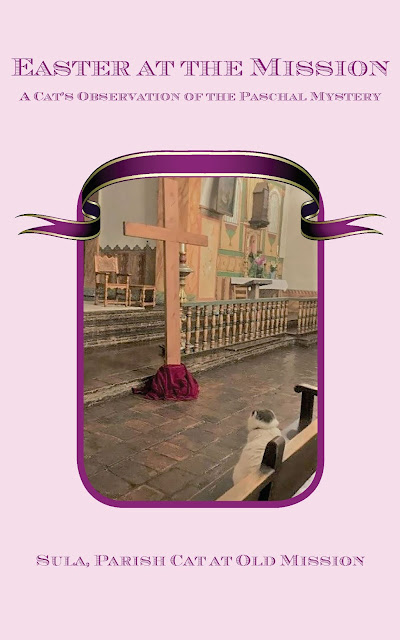 What is Palm Sunday?

Palm Sunday is the Sixth Sunday of Lent and the Sunday before Easter. It is a moveable feast because the date changes every year, just like the moveable feast of Easter. Palm Sunday starts Holy Week, the last week of Lent.

On Palm Sunday, the priest is allowed to wear a color other than purple—but can wear purple if he wishes to. Palm Sunday is a joyous interlude in the somber season of Lent. I can almost always feel the joy of the parishioners, the priest, and those who serve for the Mass—the cantors, lectors, and altar servers. I get much petting on Palm Sunday.

Palm Sunday celebrates Jesus’s triumphant ride on a donkey into Jerusalem. Jesus sent his disciplines into town to bring to him a donkey and a colt, and to tell the owner of the animals that the Lord needed them.

A large crowd followed Jesus into Jerusalem, and they laid palm branches in front of him along the way. Some even laid their cloaks in front of him, making a special path for him to follow. The crowd shouted and sang songs that should be familiar to every Catholic because everyone sings them at every Mass: “Blessed is he who comes in the name of the Lord. Hosanna in the highest!” (I wonder if there were any cats among the crowd…)

The Old Testament presaged Jesus’s journey into Jerusalem. The prophet Zechariah wrote, “See, your king comes to you, righteous and victorious, lowly and riding on a donkey.”

So, what I have heard about the symbols associated with Palm Sunday, I will share. There are several of them. Although we do not always contemplate the significance of these symbols, we should because these visible things tell us much about the invisible world of God.

Second, the donkey is often considered an animal of peace. I have never met a donkey, but I would think that Jesus would certainly pick an animal of peace because Jesus’s message was one of peace. After all, he is referred to as the “Prince of Peace.”

Third, riding a donkey in a procession would indicate that Jesus is a king because kings often rode donkeys in processions in those days. Many people mistakenly thought that he was supposed to be the king of Israel in those days. That was not the kind of king he was meant to be at all, but that mistaken idea led to some of the leadership wanting to kill him—and take him out of the running for kingship. They simply did not understand.) Ironically, Jesus’s real kingship is not local (Israel)—he reached out to the Gentiles and to everyone everywhere—and his kingship was not limited to Israel of the time when he lived—it is eternal. God did not send Jesus to fight the political battles of Israel; Jesus’s fight, instead, was for the purpose of defeating death.

Fourth, what about those palm branches? They represented good and victory.

Fifth, the words that were shouted were symbolic as well. Well, back then, the words had literal meanings, but today, to understand them, we have to consider the original meaning of the words (in their original language, Aramaic). For example, hosanna refers to savior or salvation. That, of course, referred to Jesus and foreshadowed the value and effect of the Resurrection.

Here in San Juan Bautista, we live among palms, and I sit among them and play among them every day. I have been told that our climate here is very similar to the climate in Jordan and Israel, where Jesus lived and ministered.

On Palm Sunday, the church is decorated with palm branches. The parishioners each get a palm frond, which some folks fashion into the shape of a cross, that they keep until the following year, when they return them so that the palm branches can be burned to make the ashes for Ash Wednesday.

At the beginning of Mass, the parishioners gather outside the church, each holding his or her palm branch in hand while the priest says a prayer. Sometimes, they form two rows, with the priest at the head. Other times (most times at our Mission), they just gather around the priest, close to each other and to him. I gather with them when I can. If there is no room for me, or if I am needed for someone special inside, I wait on a pew until they come back in.

The procession can be into the church. It can be around the church. It depends upon what the priest wants, I suppose. There are many ways to emulate the ride of Jesus into Jerusalem as his followers walked along beside him.

Sometimes (not often at our Mission), the priest and parishioners walk around the church instead of walking straight into the church. While processing, they often sing:

The King of Glory comes,
The nation rejoices,
Open the gates before him,
Lift up your voices.
etc.

One year, Fr. Jim, not only walked around the church; he walked around the entire town (well, after all, our town is tiny). He went right from the church, straight down to Third Street, the main street in San Juan Bautista, all the way to almost the end of Third Street, then back up Monterey Street to Second Street, where the church is located, and back past the Mission gardens and into the church. Deacon Van led the way, swinging the thurible—and spread incense all over downtown San Juan Bautista!

I wished I could have gone with them, but I know where my place is: the Mission. I do not leave the Mission grounds; that is by choice. So, when Fr. Jim led the procession around town, I stayed at the Mission, my home, and waited for everyone to return—I knew they would—under the stone bench in the Mission gardens.

Most years, though, the procession is very short. After receiving their palm branches, the parishioners walk back into the church, which is decorated with palm branches, and down the aisle, where I am eagerly awaiting their return.

However, it is done, it is a beautiful ceremony. Most important, it reminds us of the great joy of Jesus entering Jerusalem that preceded the great sorrow of his passion just a short while later.

Read more posts by and about Sula HERE. 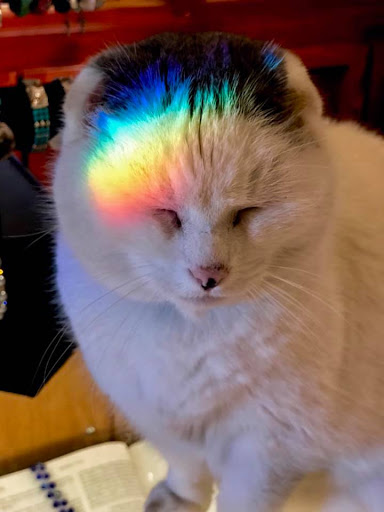 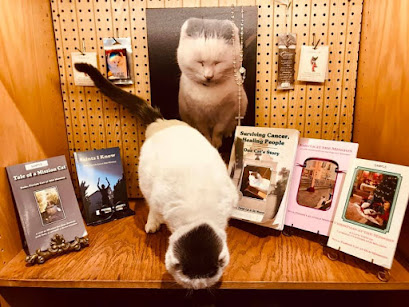 Hm, where is my Dia de Muertos book?