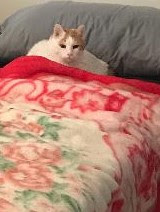 Murjan, born in Jordan, traveled to the USA when he was just a couple of years old. He is the only domestic cat among the six cats, but he quickly established himself as the alpha cat. He sometimes thinks he is human and likes soft and warm sleeping spots. Other times, he is certain he is a dog, likes to be walked on a leash, and rolls over to have his belly rubbed. 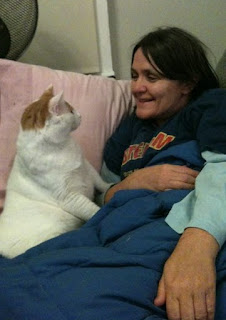 Murjan loves to communicate, especially having night time discussions with his human. 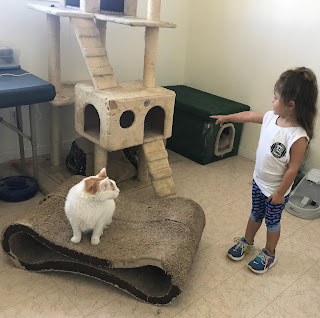 He will even listen to and obey little ones. 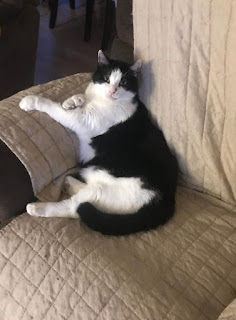 For many months,  Happy Cat hung out in the bushes, waiting for the other feral cats to finish eating the food that had kindly been set outside. Then, one day he became very ill, climbed the 17 steps to the Leaver front door, where he fell, exhausted. Betty Lou discovered him there, scooped him up, and took him to the vet. Happy Cat had a serious lung infection. Once healed, it was not safe to let him outside. That did not matter because he was delighted to have found a home and will not venture outside even if the door is left wide open. 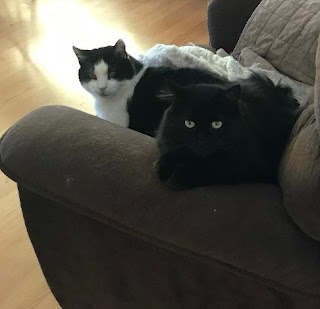 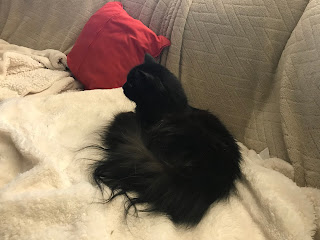 Bobolink (on the arm of the chair) was a feral rescue by a shelter worker who was going to put him back out on the street because he was too scared to move from the spot he was sitting in -- needed a bed pad because he would not use the litter box. She named him Boulder. He was about six months, and from observations, he was likely abused by humans while he was on the street. However, a few days alone together with Happy Cat in the cat room turned Boulder into Bobolink. Happy Cat is the epitome of the social, laid-back cat, and after a couple of days, he would romp around the house with Bobolink, with Bobolink liking to leap over him, with his amazing feathery tail held high. Immense change--and so quickly! 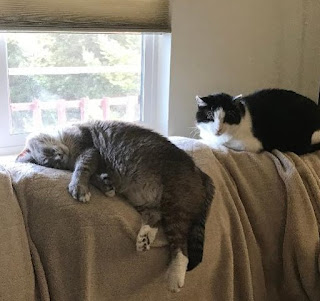 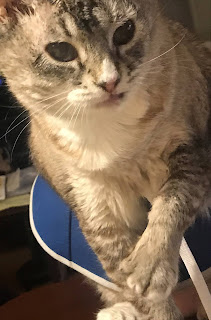 Snyezhka (left) and Happy Cat were friends in the wild. He apparently was her protector. Once she herself was rescued, she immediately recognized Happy Cat and he her. They both have four Hemingway paws, which is quite rare. One difference, though: Happy Cat knows how to sleep on a human couch. Snyezhka is still figuring that out. But she takes a better picture standing up! And it is possible to see that she is a polydactyl Siamese Lynx - Tabby mix. 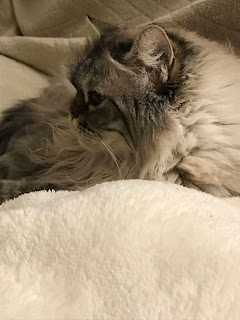 For more than a year, Simone lived under the house the Leavers were renting. A Tabby - Lynx Persian blend, she was petrified when, after venturing into the empty house the Leavers were moving out of, she was trapped and taken to the vet. She immediately bit the vet! For almost a decade, she hid out of sight in the new house, only coming of the shadows to eat. Over time, though, she gained confidence and now likes to be petted -- on her own terms and time. 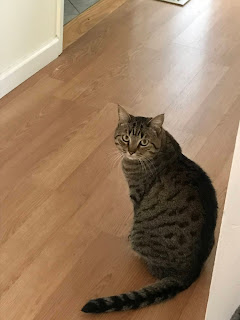 Wooper was found in the grass by a friend of the vet. Feisty, she captured the heart of the Leavers, who took her home. Their only pure tabby cat. She is a loner but gets alone with the other cats. When she wants a treat, she will climb up beside Carl or Betty Lou and tap on their shoulder. Interestingly, she cannot meow, but she makes her presence known through treadmilling on a surface that will make noise. 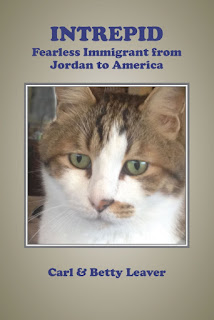 Intrepid, no longer alive, was a feral rescue, found, like Wooper, hiding in the grass behind a villa in Jordan by a professor friend of the Leavers. The tiny kitten, no more than a few weeks old, had lost his mother, but he quickly made himself at home with the Leavers, eating non-stop for two weeks. He grew into a friend, interactive, curious cat and is dearly missed. Finding him quite unique, the Leavers wrote a memorial book about him. More information about the book can be found HERE.
authors Betty Lou Leaver Bobolink Boulder Carl Leaver Caturday Happy Cat Murjan Simone. Intrepid Snyezhka Wooper