Excerpt from Lamentations of the Heart (Wells-Smith): "I will remain in awe for the rest of my earthly life." 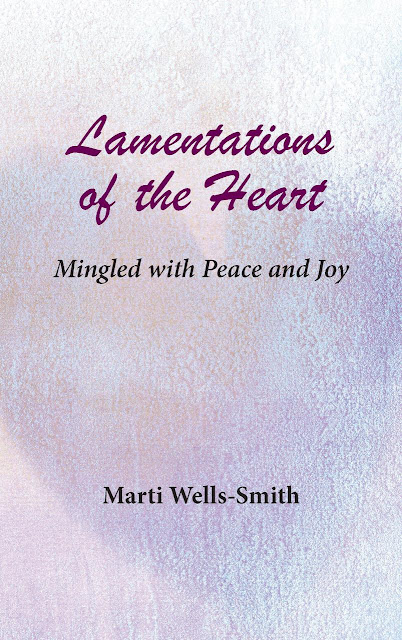 ... Two weeks later, an old friend and I took Grant’s [my son's] remaining ashes to Eureka Springs, Arkansas, my favorite place for Autumn retreats. Scott stayed home to care for our animals and give me a chance to fulfill my final mission with a much needed break during my most loved season of the year.

There was a light, misty rain at times, but the weekend was still lovely. I tried to take momentary breaks from my thoughts of Grant as we enjoyed the hills, foliage and turn of the century charm that’s unique and family oriented.

On our final day, we went to Inspiration Point, a gorgeous outlook that gives a sweeping view of the valley below. In years past, I’ve looked upon multi-colored trees scattered among streams, farm houses and red roofed barns, all of it appearing miniature from the fenced area above. It was always breathtaking in the sunlight, but that morning, it was cloudy with patches of fog as we drove up the winding road to our destination. I clutched my small pouch of ashes and asked to be alone for a moment to pray and reflect. No one else was there, which was very unusual.

I approached the observation area and looked down. The entire valley was filled with fog that completely blanketed the view. It literally reached up to right below the fence where I stood. At first, I wondered if I should return later, but something held me there. As I continued to look at the thick cover of fog, a small, circular rainbow, in a soft lavender color, began forming, directly below me, hovering on top of the fog. I was mesmerized and didn’t move. As I continued to look, my shadow was projected into the center of it.

There was no sun that day, and there was no rational way that it could be happening. It could only have been the light of God, and there are no words to fully describe its beauty. I called out to my friend to join me, wondering if she’d be able to see it too. She looked down and her breath drew in.

We continued to gaze at it, as my beautiful gift, my rainbow, slowly began to disappear. As it did, I released Grant’s ashes. Part of them fell into the fog, part remained on the rocks directly below the fence. We went to the car without speaking, as I tried to regain my composure enough to drive. I had asked Father for Grant’s spirit to be with us that day, too, and it was so spectacular that I was in awe. I will remain in awe for the rest of my earthly life. ...

Read more posts about Marti Wells-Smith and her book HERE.