Cancer Diary: He Wasn't Sleeping Because He Was Tired (Signs of Dying) 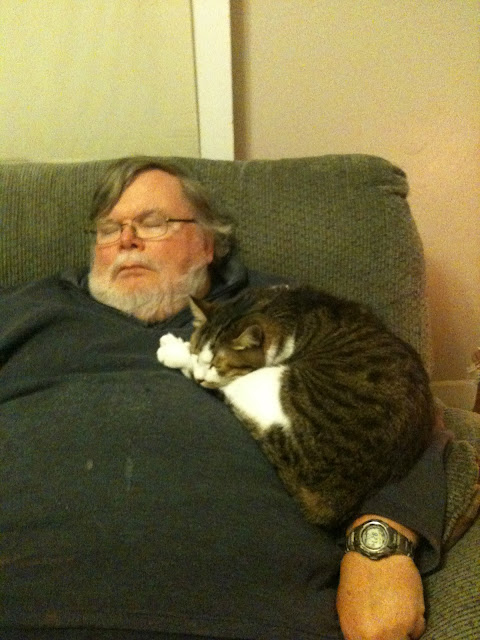 Carl dozing with his beloved cat, Intrepid
both died of cancer, were cremated, and share a vault in local cemetery's columbarium

Carl was often dozing during the last months of his life, perhaps as much as the last year. He had had uncontrolled sleep apnea and restless leg syndrome for years. For the former, her refused treatment; the CPAC and his beard battled for dominance, and his beard won. RLS was tames with medicine.

When Carl would doze off, I just assumed he was tired because he did not get adequate amounts of sleep. However, something else of which I was completely unaware was probably at work: dying. The dozing off became longer and more frequent during the last 2-3 months of his life, and during the last week, he moved from being mostly interactive to being mostly somnambulant.

Carl dozed off and on during the day a lot even as much as a year before being diagnosed with advanced stage 4 cancer of unknown primary. Indeed, some of it was very likely a manifestation of what I had assumed: lack of adequate sleep. An increasing amount of it, though, was likely due to his body shutting down, especially as we approached the time that he was diagnosed and in the few months thereafter. Frequent dozing is one of the 11 signs of approaching death. This was something else I did not understand fully until after he died.

I certainly did not understand that his metabolism was slowing down and probably had been doing so in the earlier, undetected, unsuspected stages of cancer and therefore he needed more sleep. Months earlier, he had stopped watering the plants as often as they needed to be watered, and he stopped doing a number of chores that he routinely had done -- well, he did them, but sometimes every 2-3 days instead of daily. I naively thought that he was lazy; he, did, after all, have some of those tendencies all his life. Nothing tipped me off that these were signs of cancer and dying. Nothing! That is the insidious nature of cancer; in many cases, the symptoms could be explained by many things, including attitudes not related to any illness.

What I did understand as time went on was that Carl needed to doze, and when he would doze off, while working on something or even in the middle of talking to me, I just let him sleep. Intuitively. As I should have. I just wish I had known much earlier why my intuition was telling me not to wake him. Ultimately, he just did not wake up at all.