Cancer Diary: Managing Pain at the End of Life 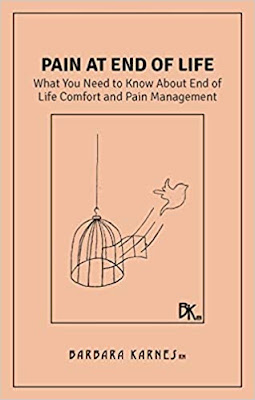 When Carl lay dying in home hospice, we were given three vials of morphine for pain. Oddly, we used very little of it. He did not need or want it. At one point, his liver was grieving him, and we gave him a small amount and called the hospice to find out what we should be giving since the bottle said only "as needed." We were told that we had given a pediatric dose -- for a 300-pound man. He did not seem to need more at that time, though, but the next couple of days, a couple of times, he indicated he was in mild pain, and we tripled the dose as suggested by the nurse. He, however, after that, never indicated he was in pain. Our son asked if he might like to be given at least a small dosage prophylactically, to which he responded, "You wanna turn me into a dope addict?" Carl had a limited tolerance for pain all his life, so if he said he was not in pain, he was indeed not in pain. Had he been in pain, he would have taken anything and everything available!

The opposite situation is discussed by Barbara Karnes in her latest blog post (for hospice caregivers): "Refusing Morphine for a Dying Loved One." Written particularly for professional caregivers (nurses and aides) working in home hospice environments, it still has much to say directly to relatives who serve as caregivers.

Carl happened to have a very peaceful end of life -- almost no pain, no anxiety, and even a cessation of his long-troubling restless leg syndrome. He just slept more and more until, finally, he did not wake up. Not everyone has that kind of end-of-life experience, however, and where pain is concerned, Barbara Karnes' little book, Pain at the End of Life, like her other books, can be very helpful -- really, truly helpful.

Blog editor's note: As a memorial to Carl, and simply because it is truly needed, MSI Press is now hosting a web page, Carl's Cancer Compendium, as a one-stop starting point for all things cancer, to make it easier for those with cancer to find answers to questions that can otherwise take hours to track down on the Internet and/or from professionals. The web page is in its infancy but expected to expand into robustness. To that end, it is expanded and updated weekly. As part of this effort, each week, on Monday, this blog will carry an informative, cancer-related story -- and be open to guest posts: Cancer Diary.