Excerpt from Understanding the Entrepreneur: The 16 Socions/Personality Types 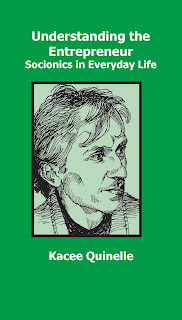 The Quinelle series of books, based on Understanding the People around You, focuses on individual personality types. The excerpt below is from Understanding the Entrepreneur: Socionics in Everyday Life. It is from the introduction, which identifies the 16 socions (Jungian personality types) presented by Dr. Filatova, using one of the two models (Model A and Model J) by which socionists organize the tyeps.

Which is your type? Check below!

Want more information? Read the books! Start with Filatova's book, then turn to Quinelle's books that break out the individual styles:

From Understanding the Entrepreneur:

Model J also includes 16 psychological types, but the representational system used by Model J is simplified. For each of the 16 psychological types, Model J uses three letters. The first letter identifies Channel 1, the second letter identifies Channel 2, and the third letter speaks to Extroversion and Introversion. The order of the letters provides the greater insight needed to show whether a particular personality is Rational or Irrational.

In Model J, the J and P of the MBTI, and the Rational and Irrational of Model A, are expressed differently. In Model J, the Rational and Irrational components are not listed separately, as in the MBTI (where J and P are the final letter of each individual psychological type), but are shown through the ordering of the letters that describe the psychological type. Thus, following the example above (in Model A), a Rational who is Intuitive, Thinking, and Introverted would be represented as a Thinking Intuitive Introvert (TII), which, by the way, is the representation of the Analyst (one of the 16 types presented in Filatova’s Understanding the People Around You). In contrast, an Irrational displaying the same three traits would be presented as an ITI (Intuitive Thinking Introvert), which, by the way, is the representation of Filatova’s Critic. The Entrepreneur, then, is represented as TIE (Thinking Intuitive Extrovert). The first characteristic is the dominant one. So, the main difference is simply representational.

Thus, Model J arranges the four functions in the order of strength. The function in the first channel is energetically stronger than the function in the second channel. Included also, though, are channels 3 and 4, which are the weaker channels and, as mentioned earlier, the contrasting functions in a dichotomous system. They are, in fact, alternatives to the first two functions. So, for example, if Sensing resides in the first channel, then Intuiting will appear in the third channel, and if Thinking is in the second channel, then Feeling is in the fourth channel. Thus, in Model J, there is not an either-or distribution of functions, but rather a continuum of functions and the traits of any given individual lie at a specific point on that continuum, typically closer to one pole than the other.

TSE, Thinking Sensing Extrovert (The Professional). This type insists on factual reality. Those belonging to this type feel a strong need to understand the properties of the material world. The Professional wants to contribute to the reality around him or her and to organize a comfortable workplace for colleagues. High quality is also very important to the Professional. Professionals are devoted to structure: they want a “system”—they strive for it, follow it, and improve it. They expect others to do the same and will, at times, attempt to pressure them into doing that.
STI, Sensing Thinking Introvert (The Craftsman). The Craftsman likes to work with his or her hands (or the mental equivalent, e.g. mechanics, engineering). Everything around the Craftsman is associated with comfort—the Craftsman makes certain of that. High quality products are the order of the day for the Craftsman.

STE, Sensing Thinking Extrovert (The Organizer). Organizers like rules, regulations, and order. They don’t back down from the forces that rule the world; they are ready to try their own hand at winning. They prepare for victory with lucid, logical calculations.

TSI, Thinking Sensing Introvert (The Structurist). Structurists expect the world to be based on verifiable and identifiable systems. These systems, for them, exist in both the material world and the interpersonal world. If the order of their world is disturbed, Structurists expend all their energy to restructure it.

TIE, Thinking Intuitive Extrovert (The Entrepreneur). Entrepreneurs work on managing, manipulating, and improving factual reality. Making the best use of their time is also important to them.

ITI, Intuitive Thinking Introvert (The Critic). The Critic’s world is infinite, flowing, and multi-faceted. An individual’s purpose is to find his or her own place in the never-ceasing flow of events. Critics take action only after they have determined the optimal time to do so.

ITE, Intuitive Thinking Extrovert (The Seeker). Seekers find immense opportu
nities in enigmas. They look for the underlying regularities—and in that, they discover opportunity.

TII, Thinking Intuitive Introvert (The Analyst). Analysts expect there to be rules underlying everything around them and will work to ensure that this is the actual situation. They look for the real meaning of things, events, and processes in their attempt to uncover the underlying rules.

FSE, Feeling Sensing Extrovert (The Enthusiast). Enthusiasts are motivated by emotions. Of the set of possible emotions, they prefer the positive ones. They attempt to increase these positive emotions by entertaining the people around them, arranging things, creating comfort, and giving gifts.

SFI, Sensing Feeling Introvert (The Epicurean). The Epicurean seeks pleasure; he or she wants comfort and harmony. Among their favorite activities are hanging out with friends, sharing happiness, and enjoying the good life.

SFE, Sensing Feeling Extrovert (The Leader). Leaders look to expand their sphere of influence. Flame and glory motivate them. On the negative side, they attempt to manipulate people through their weakness.

FSI, Feeling Sensing Introvert (The Guardian). The Guardian wants harmony in relationships. They respect and pass on traditions, and observe moral and ethical norms—and they expect others to do so as well. They will make every effort to maintain this system of values.

FIE, Feeling Intuitive Extrovert (The Performer). Performers’ lives are filled with emotional strain and dramatic experiences. They look for ideas that capture people’s imagination and affect their emotions.

IFI, Intuitive Feeling Introvert (The Romantic). Romantics focus on their own imagination, using it to see into the past and future. They use their imagination, as well, to see the world in its entirety and capture the dynamics of events around them. They are good at inspiring people to accomplish desired activities.

IFE, Intuitive Feeling Extrovert (The Initiator). Development is the key word for the initiator—development in human society, technology, and production. They are good at organizing people to accomplishing new things. Initiators are spontaneous people, and they often understand by “vision,” rather than by fact or act. They are quick, though, to involve other people in their visions, plans, and actions. Initiators are very ingenious. Their downfall is anything systematic; they cannot follow a system and do not want to.

FII, Feeling Intuitive Introvert (The Psychologist). Psychologists focus on harmony among people, ethics and morality, and guarding traditions. Essential to them is self-improvement. They train their spiritual life, and they look for the best in people.