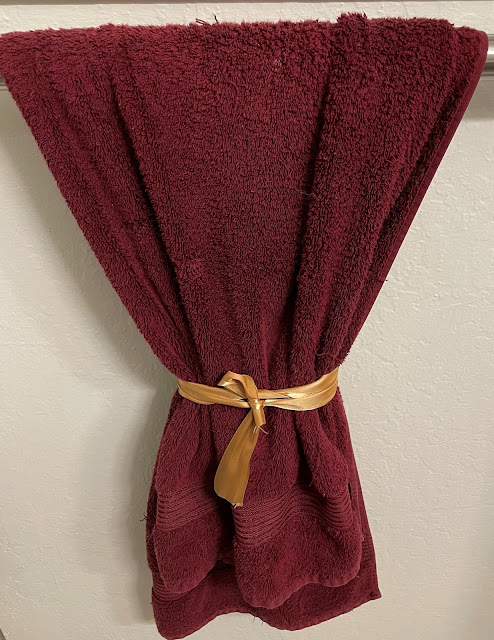 This picture goes with maintaining a sense of independence and trying to help out the caregiver, especially when the caregiver is a family member and the cancer patient is still living at home (pre-hospice or on hospice -- although if put on hospice, chances are the patient has progressed to the point of not being able to assist with self-care), like my husband Carl was.

Carl's push toward self-care was prompted by an unwillingness to talk about death (link to earlier post) and not wanting to admit that terminally ill (not necessarily good things because we had to scramble after he died to hack his accounts to take care of matters that could have been planned for -- but not just he but we, the whole family, were choosing to focus on life, not death. So, as a tinkerer, he came up with some home adaptations that could be helpful to anyone with reduced and reducing mobility.

The picture above is the way in which he used towels to assist himself in getting up from the toilet once being able to reach the towel bar was no longer possible and the bars around the toilet were not enough because he could no longer push himself or stand from a sitting position, but he could pull himself up until a couple of weeks before he died. He used the towels for assistance in the master bedroom where the distance between toilet and wall was greater than in the hall bathroom. There he had very solid towel bars installed; these were very close to the toilet, and he was able to use a meat hook (for hanging meat in a warehouse freezer) to grip the bar and pull himself up. This level of independence was very important to him psychologically, especially since the mobility deterioration was so evident in the need for a chair lift and a wheelchair.

(Earlier, before he ended up in the wheelchair, he found a Figure-8 bar that allowed me to help him get out of his chair, with me pulling on the bar while he held on. The figure 8 gave us each a handhold.)

He tinkered with little things as well, changing the usage of space in the house. Medicine bottles were gathers into 2 containers (morning and night meds) and placed within easy reach on the coffee table near his wheelchair. He found a mobile stand for his computer so that he could pull it toward him rather than having to manipulate himself into sitting at a desk, which became impossible to do near the end of his days.

He used his phone, again until about two weeks before his death, to organize his life and take care of many things. He made a lanyard to wear the phone around his neck when it became difficult for him to reach for it in a pocket. Our 4 litter robots (we had 6 cats) were tied into the phone; they would let him know that they were full. At the end, he could not empty them, but he could track them and let others know they were full. It gave him a sense of not being a burden, but a help.

I am sure there are other cancer patients like Carl, who want to focus on the living and who want to do as much as possible for themselves. An added benefit, at least for Carl, was that all the tinkering kept him focused on living and positive things and not on darker thoughts.

I found it important to recognize that he was trying to help himself. It is easy to not notice the little things he was doing (some of them not so little but requiring great effort) because of additional help he needed that he just could not handle himself. Carl appreciated when I noticed, and I know he felt disappointed when I didn't.

Just some observations from the trenches...

Blog editor's note: As a memorial to Carl, and simply because it is truly needed, MSI Press is now hosting a web page, Carl's Cancer Compendium, as a one-stop starting point for all things cancer, to make it easier for those with cancer to find answers to questions that can otherwise take hours to track down on the Internet and/or from professionals. The web page is in its infancy but expected to expand into robustness. To that end, it is expanded and updated weekly. As part of this effort, each week, on Monday, this blog will carry an informative, cancer-related story -- and be open to guest posts: Cancer Diary.