Excerpt from 57 Steps to Paradise: The Personals 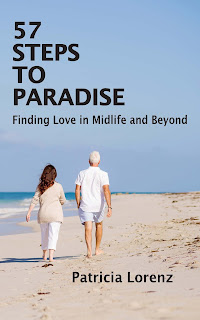 I not only answered dozens of ads in the newspaper personals section during the early to late 90’s I also probably had 20 or more first dates with men. Safe, boring, one-time-only dates. Dates with men I never wanted to see again. Meeting men in the personals became more of a hobby than a serious way to find Mr. Right. Years later when newspaper personals gave way to on-line dating, I have to say the on-line ads worked a lot better. Getting to know someone via e-mails is easier than only getting to talk to them on the phone before you actually met face to face on a real date. On-line photos and in-depth writing conversations back and forth help you weed out the frogs.
One year during the 90’s, a friend of mine and I even offered a writing class at a big writers’ conference on how to write sizzling ads for the personals. I can’t remember how many people showed up or what exactly we taught them, but here’s our promo ad for the class.

HOW TO WRITE GREAT ADS FOR THE PERSONALS
SATURDAY, FEBRUARY 1ST FROM 1-3:30
If you’ve never written an ad for the Personals but you’re
DESPERATELY SEEKING SOMEONE
this rib-splitting workshop is for you.
If you’ve been writing ads for years and keep meeting frogs
instead of a prince or a princess, this hands-on workshop will
help you get that dance card filled.
Two single women, both full-time professional writers,
who have had lots of fun with the personals for years,
will take you step-by-step toward landing
the date of your dreams.
You’ll not only write a great ad during this class, but we guarantee a laugh a minute and free refreshments. You’ll also get help with voice mail ads.
P.S. If you meet Mr. Right, you have to invite us to the wedding.

Once the 21st century rolled around and on-line dating became big business with match-making companies bragging about how many marriages they’d created, dating took on a life of its own. Seven years earlier, in 1993, Dr. John Gray published the self-help book, Men Are from Mars, Women Are from Venus. That book revolutionized the way we thought about how men and women interact and helped pave the way for more successful dating. After all, if we were going to start dating in middle age and beyond, we at least had to have a better knowledge of what makes men tick.
Dr. Gray explained that one of the biggest differences between men and women is how they cope with stress. Men become increasingly focused and withdrawn when they’re experiencing stress. Women become increasingly overwhelmed and emotional. Men feel better by solving problems. Women feel better by talking about problems.
The book goes on to explain that when a woman becomes upset or is stressed by her day, to find relief she seeks someone she trusts and then talks in great detail about everything that went wrong that day. When she shares feelings of being overwhelmed, she suddenly feels better. A woman is not ashamed of having problems. A woman's ego is not dependent on looking competent but rather on being in loving relationships. We women openly share feelings of being overwhelmed, confused, hopeless, and exhausted. Men do not. A woman feels good about herself when she has loving friends with whom to share her feelings and problems, but a man feels good when he can solve his problems on his own in his cave.
When a woman talks to a man about problems, the man assumes she is holding him responsible. The more problems, the more he feels blamed. He doesn't realize she's talking to feel better and that he doesn’t have to do a thing but sit there and nod his head supportively.
Dr. Gray explains that men talk about problems for only two reasons: they are blaming someone or they are seeking advice. If a woman is really upset, the man assumes she is blaming him. He draws his sword to protect himself from the attack. If she seems less upset, he assumes she is asking for advice. He becomes Mr. Fix-It and tries to solve her problems. The real problem, however, is that we women don’t want the men in our lives solving our problems. We just want to talk about them. We aren’t blaming them or seeking advice. We just need to talk it out.
When you’re carving out a relationship with a man, whether it’s someone you just met on-line or someone you’ve been dating for years, it’s important to know some of the basic differences in the two genders.
For the most part women talk to think. I know firsthand that I can be in a room full of people who are having an interesting discussion about this or that. I’ll find myself joining the conversation, and sometimes just by talking I can change my opinion 180 degrees. I’m like most women. We think as we talk, and we find it easy to rearrange our opinions while we’re talking.
Men, on the other hand, think to talk. Usually they don’t say a thing until they’ve thought about the issue long enough to form an educated opinion. Only then are they able to verbally express themselves. When they do talk, it is to convey or gather information. They must think first and talk later.
Did you ever notice that a man will generally stop talking when he’s upset? He needs to retreat to his cave to cool off and ponder his thoughts. Once he’s thought things through, he’ll come back to you with some well-thought-out opinions on the matter at hand.
I read somewhere years ago that men, on average, say 7,000 words a day. Women say 20,000 words a day. The thing is, men do not want to listen to—and probably can’t even process—our 20,000 words. That’s why we women must find, nourish, and enjoy friendships with other women. We can talk to our hearts’ content, change our opinions willy-nilly while we’re talking, and solve almost every problem in any relationship we ever have with our women friends.
So, if you’re out there experiencing on-line dating or just being set up with a few good men by your women friends, make sure you’re also taking the time to nourish friendships with many women. Close friendships with other women provide the gold threads that help you create the fabric of an amazing relationship with a man. We women need close friendships with other women in order to survive this world of dating. Believe me, your women friends will be the ones who will help you create a relationship with a man that sizzles.